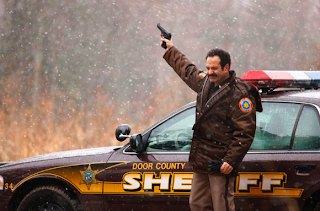 Joe Peterson (Ross Partridge), a "tough love" children's' book author who is suffering from writer's block leaves his Venice, California home to vacation in Sturgeon Bay, WI with his girlfriend's brother JP. (Michael Chernus) JP's agenda is to train for and participate in the annual Christmas day Polar Bear Plunge, and Joe is hoping to gain creative inspiration. When an accident lands JP in the hospital, Joe is forced to fend for himself and begins to befriend some of the locals, including the sheriff (Tony Shalhoub) and his daughter Sif (Katie Aselton) who quickly becomes a love interest.

Feed the Fish is a charming little film that celebrates the beauty of northern Wisconsin while maintaining a sense of humor about how freakin' cold it can get in December. Director/writer Michael Matzdorff presents funny characters who are heavy on the charm and light on small town "crazy local" stereotypes. Patridge is appealing, and conveys "fish out of water" without stooping to a gawking figure who just looks amazed at everything. Shalhoub is awesome as a cranky sheriff who is overprotective of his daughter, and seems to have fun with the role. The plot is simple, sometimes almost too simple, with unanswered questions at the end that, while normally appealing in other kinds of films, just seemed like an oversight in this one. I think that there is a desire to see romantic comedies wrapped up in a little package, and this one didn't quite get the ribbon right.

Feed the Fish isn't rocket science, and I didn't walk out of it with a revelatory feeling as if I had seen an amazing and important film, but overall, it was well done and enjoyable. Sometimes that's all we really need in a film.