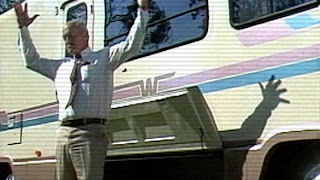 Jack Rebney has been called "The Angriest RV Salesman in the World" and "Winnebago Man" ever since outtakes of a Winnebago industrial sales movie he filmed in 1989 went viral. It started as blurry VHS tapes that people copied and passed around to others, until the advent of You Tube turned them viral, seen by millions of people worldwide. What makes the videos so infectious is that Rebney, when he messes up, lets out foul-mouthed diatribes and throws his body around so much that one can't help but laugh at this middle aged guy who is just plain pissed off. Winnebago Man seeks to track this Internet legend down and get the story behind the more than 20 year old footage and find out if Rebney is, indeed, the angriest man in the world.

Winnebago Man is an interesting documentary that provides a lot of laughs, but some of them are a little uncomfortable. Director Ben Steinbauer, who conceived of this project as a long-time fan of Rebney's videos, perhaps gets a little more than he bargains for in the more than two years he spent making the film. The beginning of the film is hilarious, depicting the history of the spread of the videos, showing (hilarious to the point of tears) response videos and interviews with Rebney fans who are in the entertainment industry. Steinbauer conducts an exhaustive and admirably ambitious search to find Rebney, who had seemingly dropped off the face of the earth, but in actuality, was actually living on top of a mountain. At first, Rebney's behavior and plain talk are really funny, but after a while, the more that becomes apparent about his life, the more dark the tone seems to become. Steinbauer and Rebney have two completely different agendas: Steinbauer seems conflicted with whether he wants to exploit Rebney or honor him (or a little of both) and Rebney feels like he's doing Steinbauer a favor and therefore only wants to talk about his political views and how much he hates Dick Cheney and big business.

The film starts out strong, perhaps because it is entertaining and fast paced, but it kind of loses its way in the middle, where it was difficult to see what direction it was going to take, and as a result, seemed to stall for a while. The end of the film, which takes place at the Found Footage Film Festival in San Francisco, brings the film back on track for the most part, and Steinbauer seems to achieve his thesis, (though it would have been nice to have been informed of what it was earlier) that people may laugh at him, but it's not out of malevolence, it's because they are fans, and I think that his ultimate accomplishment was being able to show this to Rebney himself.

Winnebago Man is a far from perfect film, but it is more thought-provoking than I thought it was going to be. During the film, I found myself reflecting on why I was laughing at this foul-mouthed 76 year old and if it was okay or just kind of sad and immature. That is for the viewer to decide, but if nothing else, Winnebago Man is a fairly entertaining reflection and investigation on modern pop culture history.