MFF Film Review - The Art of the Steal 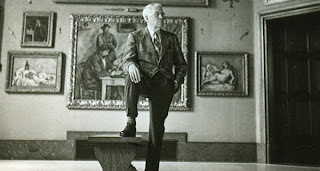 The Art of the Steal documents the drama behind the struggle for control of the Barnes Foundation, a foundation and institution established in the 1920's by Dr. Albert Barnes just outside of Philadelphia. The reason this has become a hot-button issue is because Barnes, who made his fortune in pharmaceutical sales, assembled the world's greatest private collection of Post-Impressionistic art valued at more than 25 billion dollars. Barnes, a New Deal-era liberal democrat, was protective of his foundation and made some powerful enemies, including philanthropist and Philadelphia newspaper mogul Walter Annenberg, and despite a seemingly iron-clad trust that strictly forbade the art to be sold or moved to another location, soon after his death in 1951, the battle for his foundation began.

The Art of the Steal is an amazing and breathtaking, and succeeds in performing the rare feat of being a suspenseful documentary. Director Don Argott does an incredible job telling the history of the foundation and interviews many of the people who worked closely with Barnes or were students at his foundation. The breadth and scope of the art collection is unfathomable, and the more that is revealed about Barnes' intentions, the more heartbreaking the mismanagement of the foundation is, and the passion of the supporters of the foundation is infectious.

I grew up among art and have a passion for art history so The Art of the Steal was not a hard sell for me, but it is accessible and intriguing for those who may only have a peripheral interest as well. The Art of the Steal also proves that it is important to look beyond the headlines to see the real motivations behind a story; Argott shows several newspaper headlines announcing stories like, "Pew Foundation to infuse 100 million in Barnes Foundation" which on the surface looks great, but knowing the story behind it is what is important and changes the tone completely. The amount of politics, back room deals and even bribery is astounding, especially in light of the fact that what we are discussing is a beautiful collection of art that was always supposed to be private and for education. The beginning of the film shows a press conference with the mayor of Philadelphia announcing the acquisition of the Barnes Foundation's art, which takes on a completely tone by the end of the film. In my mind, there is no doubt this is a sign of a compelling and thought-provoking film.

The Art of the Steal is truly one of the best documentaries I have ever seen and feel that it is important to see for a number of reasons, regardless of the viewer's degree of interest in art history and politics. After seeing this film, opinions may change about how some non-profit agencies work and you will be educated.