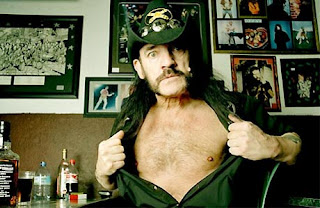 Lemmy is a documentary about hard rock icon and genuine character Lemmy Kilmister, lead singer and bassist for Motorhead. Directors Olliver and Orshoski follow Kilmister around in his day-to-day life in Los Angeles, where he is an institution, and also on tour with Motorhead and the Head Cats.

I criticized the film I saw I before this, Who is Harry Nilsson? because I thought that it wasn't full-bodied enough for non-fans of the subject. I'm not a Lemmy Kilmister fan, nor did I really know a lot about him, yet I was enthralled with this documentary from start to finish. Kilmister is one hell of an original and lives his life balls to the wall. What makes him refreshing is that he is also completely down to earth and, despite his hordes of fans, still seems kind of surprised at his fame and success.

Lemmy is Olliver and Orshoski's feature debut which I find jaw-dropping, based on the quality of this film. Not only did they gather an amazing amount of interviews from nearly every hard rock singer I can think of, from Scott Ian to Joan Jett, to Ozzy Osbourne, but what they were able to film and the quality with which they filmed it was outstanding. The audience gets to see recording sessions between Kilmister and Dave Grohl, and a practice session where Kilmister sat in with Metallica. There are also full-scale concert footage at performances from around the world that are so high quality that it's really hard to believe this is their first film.

Though I thought the film was a bit long, perhaps by about 20 minutes (though the concert footage was well done, after a while it hit a saturation point, particularly since I actually am not crazy about this kind of music) I thoroughly enjoyed Lemmy and feel that I saw a first-rate documentary about a true character and musical icon.