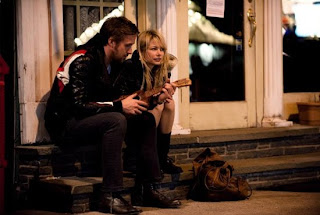 Director: Derek Cianfrance
Screenwriters: Derek Cianfrance, Cami Delavigne, Joey Curtis
Starring: Ryan Gosling, Michelle Williams
American love stories are not an uncommon genre - just look at your local multiplex and you'll see any number of boy and girl meet cute movies, or the time-honored tradition of opposites attract and hate each other until they love each other. It's a rare American love story that realistically depicts relationships, however, and for those, one mostly has to look to independent cinema; a recent offering being the sublime (500) Days of Summer.

Blue Valentine stars Ryan Gosling and Michelle Williams as Dean and Cindy, a married couple who are at their breaking point, regardless of whether they are ready to let go or not. It is told in a non-linear style, set in the present, but cross-cut with scenes showing the evolution of their relationship from both perspectives. As more of their history is revealed, the more poignant and significant their present situation becomes, and their personal growth and stagnation become apparent.

At the forefront of Blue Valentine is its amazing performances by Gosling and Williams. Anyone still writing them off as the guy from The Notebook and the girl from Dawson's Creek would be surprised by the incredible intensity and depth of their work in this film. There are a lot of types of "good" acting, and the performances in Blue Valentine are somehow both natural and challenging. It is obvious we are witnessing an acting performance, but there is something organic within as well, and the who experience is appealing and noteworthy. It's impressive and encouraging that Gosling and Williams lend their significant acting chops to independent cinema as their predominant medium.

Though non-linear, the story of Blue Valentine unfolds naturally and cleverly, but without pretension. Elements of their lives at present, taken at face value, take on an entirely different meaning when pieces of their backgrounds are revealed, a brilliant device executed with finesse by writer and director, Cianfrance, with co-writers Delavigne and Curtis. Their decision to test the audience by leaving unanswered questions hanging until their answers are naturally provided later in the film is risky and admirable, and ultimately paid off in a big way.

Blue Valentine, for all of its clever reveals, is also stark and at times, profoundly unpleasant. The camera is unwavering and thus, we are subjected to real life, warts and all. Scenes in an abortion clinic, painful fights between the main characters and the effects of the parents' soured relationship on their beautiful and charming daughter are gut-wrenching and not for all audiences. I was left with such a bleak feeling that my initial reaction to the film was not entirely positive, and I transferred that feeling of despondence to my vote on the audience ballot, giving it less of a grade than I probably would now. It was only after a little digestion and reflection that I realized how good Blue Valentine is. (And perhaps an indictment of instant, gut reaction balloting?) Ultimately, however, since we can't rate on a half scale, I'm zen with my decision to round down instead of up, regardless of the reasons behind it.

Like another powerful relationship film, Mike Nichols' Who's Afraid of Virginia Woolf? (1966), Blue Valentine is a hard pill to swallow, but ultimately, a really good film. It's not for everyone, but it is an important dark member of the American love story family.