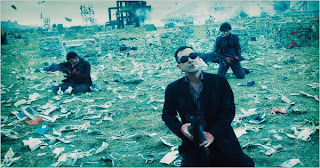 In Hong Kong, a woman, her husband and two children are gunned down in their home. Barely clinging to life and her family dead, when her father, Costello (Hallyday) a famed restaurateur in France, comes to see her in the hospital, she points to one word in the paper: "Vengeance". Costello vows to avenge her family, and with the help of three hired gunmen who work for the mafia, he sets off to find the perpetrators and kill them. Unfortunately, there are several roadblocks along the way, most notably, the bullet that's been in his brain for 20 years that is rapidly removing his short-term memory. Due to these extenuating circumstances, the question arises of whether vengeance can really exist when one doesn't remember why they are seeking it nor who they are seeking it for.

I was afraid that Vengeance was going to be a Memento clone that would have some Asian action movie style thrown in to the mix. Vengeance has more depth than being a simple copy, and the action is definitely there, but it all left me a little flat. There are eye-rolling general stereotypical gags like the fat gunman having his goofy eating scenes, etc. that sunk like a stone with the audience in general. The acting in Vengeance is decent, though I found Johnny Hallyday, apparently a legendary French singer, kind of hard to look at. I'm not sure if it's a really oddly aged face or there's some majorly bad plastic surgery going on, but his appearance was actually a little distracting to me.

When I reflect on Vengeance, it meets a few of the criteria I tend to favor in films: a decent story and ambiguous ending open to interpretation among them, plus there is a fair amount of action thrown in for good measure. Truthfully, I rated the film a 3 out of 5 on the audience ballot, and that means "Good" at the MFF. I guess I can chalk it up to my high expectations of the films presented at the festival because a "Good" rating should be what we expect, right? I guess it's the least I expect, which is why I was just kind of warm about it. Vengeance is a good film, and I definitely recommend it for those who like the Hong Kong action film genre because that's the audience that will get the most out of it, rather than a mainstream one.