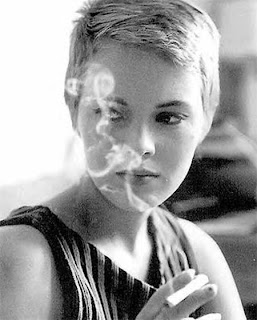 (Note: this is not so much a review as just a few thoughts about the film, since there have been about 3 million reviews written about this film in the past 50 years)

Michel (Belmondo) is a car thief who, while joyriding in his latest acquisition, shoots and kills a policeman. When he returns to Paris, he tries to secure money owed to him, avoid the law and convince one of his former lovers, Patricia (Seberg) an American journalist and student, to join him in Italy so he can hide out.

Breathless is absolutely exquisite, and a gleaming example of the French New Wave film movement, by its leading director, Jean-Luc Godard. In crisp black and white, beautifully photographed with quick, jarring edits, Breathless is contradictory with its pacing. Some scenes are fast-paced and set on the busy streets of Paris, with an incredible jazz soundtrack screaming over the action, while others are quiet and intimate between Michel and Patricia in her room. It's really amazing to realize that Breathless is 50 years old because it seems absolutely timeless; everything about the film is hipster-cool and barely dated.

The French New Wave is not a movement for everyone, but those, like me, who are devoted to it as an art form should not miss this beautiful restoration; it is absolutely breathtaking and it makes me want to crack open my vintage French New Wave film books again.