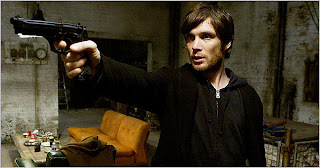 Perrier's Bounty is an Irish film starring Cillian Murphy as Michael, who owes the local heavy, Perrier (Brendan Gleeson) $1000 that has to be paid that evening or the penalty is two broken bones. (Of his choosing, but fingers and toes don't count.) Unfortunately, in order to deal with one thug, Michael chooses to get into a scheme with another thug, which, if film history or at least the Coen brothers have shown us, is never a good idea. With subplots including an ailing father (Jim Broadbent) who comes out of nowhere to attempt to hang out with his son, and dealing with an unrequited love interest who is suicidal over the fact that her two-timing boyfriend has dumped her, mayhem ensues and leads to a very bad day for Michael.

Like similar European films of the gangster genre (like Lock, Stock and Two Smoking Barrels or In Bruges) Perrier's Bounty is rife with action, violence, profanity and dark humor. There are also a million characters, but the size of the cast is not prohibitive to the story. It was nice to see Murphy in another role other than as a clean cut, pretty guy, rather he was dirty, violent and rough, but not without some charm. He and Broadbent played fabulously well off one another. I laughed really hard during a lot of this film and never knew that Murphy could pull off comedy. Just a simple exasperated look and a roll of his huge blue eyes was enough to set me and the rest of the audience off, but it wasn't remotely corny. There were some repeated quick gags throughout the film that were a riot, including multiple showdowns with two "gangsta" parking checkers, and the numerous subplots were simple and not superfluous.

I really liked Perrier's Bounty and couldn't help but imagine who I know that I could recommend the film to, which is an alarming number of people, considering its violence and dark humor. Rather than reassess my choice of companions, I'm choosing to embrace the darkness because watching Perrier's Bounty is a great way to spend an hour and a half.