MFF Film Review - Only When I Dance 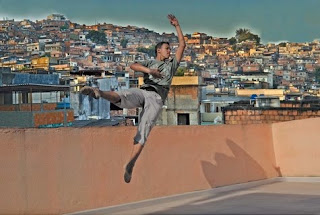 Only When I Dance is a documentary focusing on two Brazilian teens; one boy, Irlan, and one girl, Isabella who are transcending the "white, wealthy" stereotype of ballet students and vying for positions with international dance companies in order to escape the favelas they live in. Irlan is a breathtaking dancer and has opportunities lined up for him, whereas Isabella struggles with having her talent overshadowed by racism (she's black) and body issues; despite her talent and strong body, everyone is telling her she needs to lose weight (whereas in real life, she would be perceived as thin.) What Irlan and Isabella have in common, however, are their poor financial backgrounds and the unwavering support of their parents, who sacrifice everything so their children can dance.

The film is a good documentary that really gives the audience a taste of where the subjects come from and the environmental challenges they are forced to overcome. Overcrowded schools filled with rowdy kids that spill into streets where many male youth end up on the wrong side of the law or dead is difficult for those who are disciplined and focused enough to thrive in their chosen field. By contrast, the dance school acts as a sanctuary, where the students can concentrate on their craft and be mentored by their instructors.

Only When I Dance succeeds in not being afraid to show every side to the principle subjects; the headmistress mentions the fact that she's "nouveau riche" more than once and alludes to money throughout the film, Irlan, with all of his sweetness, seems to have a bit of an ego, and Isabella, suffering a loss, is shown feeling really sorry for herself, much to the irritation of her fellow dancers. This makes the film and its subjects multidimensional and interesting, and I think is an improvement over sentimentality, which is infectious, but should not be the overwhelming conceit of a documentary film. Only When I Dance is uplifting, nonetheless and very enjoyable.