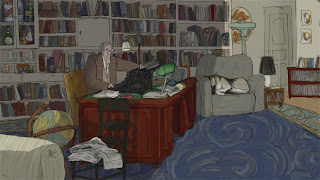 "Unable to love each other, the English turn to dogs." Thus begins the animated film My Dog Tulip, based on the novel of the same name by J.R. Ackerley. The film covers the beginning of Ackerley's relationship with Tulip, an 18 month old female German shepherd he rescues. Ackerley, voiced by Christopher Plummer, is an older man with few friends who is admittedly lonely, and his relationship with Tulip quickly becomes solid, loving and full of awe at her ability to express her love and loyalty. Told with eloquence, irreverence, humor and profound sentimentality, My Dog Tulip can definitely be categorized as a love story.

My Dog Tulip is brilliant in all aspects. The animation is simple and minimalistic, but fully fleshed out at the same time and fully cognizant of the mood of the current scene. It is used to great humorous effect, switching from full color to ridiculous stick-figure drawing on notebook paper depending on the story being told. Clearly, directors Paul and Sandra Fierlinger have a great amount of respect for the source material because the animation is a perfect complement for Ackerley's beautiful words. I was often reminded of one of my favorite authors, James Thurber, who also wrote about his own sometimes difficult family and pets with the same amount of tenderness and love. Ackerley takes it up a notch, however, and his intelligent and eloquent, yet conversational and approachable writing style was as enjoyable as the accompanying animation. And who better to give voice to Ackerley's words than Christopher Plummer, who gives an outstanding narrative performance, backed by Lynn Redgrave and Isabella Rossellini as minor characters. His lilting, elegant voice was perfect casting.

My Dog Tulip is an animated film for adults - unless parents want to explain the concept of dogs going into heat and the subsequent actions - but more than just beyond the sex lives of dogs, the film transcends the normal expectations of an animated film and explores themes that would probably go over most childrens' heads. My Dog Tulip is a wonderful film with the challenge of asking adults to look beyond the traditional thought that animation is for children. I sat in a theater full of adults who were clearly enamored with the film, which proves the challenge was met and that the film met or exceeded all expectations, including my own.