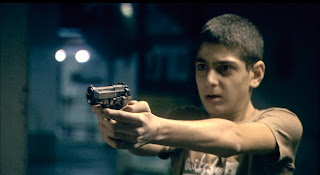 Ajami is a film in five chapters set in the West Bank on both the Israel and Palestinian sides. (The title refers to the neighborhood a couple of the stories are set in.) The five stories are all interwoven, with shared characters that, with each progressive chapter, become more fleshed out and motivations become apparent. The stories include two brothers who strive for survival after their uncle injures a member of a powerful clan, an Israeli policeman looking for his missing brother who is a soldier in the Israeli army, and a love story between a man of Muslim faith and a Christian woman, which is forbidden (or at the very least, frowned upon) in the West Bank.

Ajami is non-linear, with characters returning when you least expect them to, and the stories and actors weave seamlessly among one another. No real actors were used, only local residents, which is quite shocking based on the depth and strength of all of the performances. Every story, though approximately 20 minutes long each, were rich and full-bodied due to the excellent screenplay by writer/directors Copti & Shani. Though the subject matter was very heavy and involved some politics and nuances that may have gone past me a bit, Ajami was riveting from start to finish, a real accomplishment for a film so dense and complicated.

The winner of several Israel Academy Awards, and nominated for an Oscar for Best Foreign Film, Ajami is like the 2004 film Crash, only good. It gets its point(s) across without heavy-handedness and literally had me holding my breath at the end, so intense and impactful the entire experience was. Ajami is not for anyone looking for levity in a film, but the film is so good, it really should be experienced.