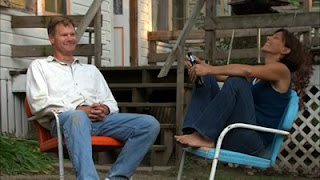 Baraboo is a slice of small town life, set in the Wisconsin town of Baraboo, best known as the home of the Circus Museum. The residents we meet are Jane (DeVita), who runs a small local motel. Living there with her are her teenage son Chris, and permanent residents include Bob, a fisherman and veteran who suffers from Gulf War Syndrome, Bernice (Schudson), an elderly woman who moves in as a result of losing her farm and most of her possessions, and Ludell and her mentally disabled son Ben, who serve as caretakers of the property. When Bernice moves in, she brings the group together and they slowly become a kind of family unit, socializing with and look after one another.

Baraboo is an inconsistent film that lacks some meat. While the story is mostly pleasant, there isn't a lot there, which may be writer/director Sweeney's intent. Unfortunately, that doesn't make for compelling cinema and less doesn't always make more. Conflicts such as the death of a soldier and even the constant strife between Jane and her son seem hackneyed and forced after a while.

Sweeney has worked with David Lynch in the past, and his influence is obvious in her film making. Similarities to his film The Straight Story are obvious, but I kept seeing strong comparisons to Blue Velvet, from minor elements such as the bright primary colors in the film to its dissolve transitions featuring scenes of nature. These go really overboard for me, however, and after a while I started to mentally say, "Wait for it..." at the beginning of a scene because I knew that 9 out of 10 times it was going to involve a 10 second shot of some tree branches.

Another thing one must look past are the amateur performances of the actors. It took a while for me to get over the wooden acting by what I suspected were probably local actors (they are) but by the end of the film I had either gotten used to it or they had actually gotten better, (since scenes aren't shot in order that's probably not it, but I'll give the benefit of the doubt) or maybe I simply had lightened up a bit.

To her credit, Sweeney, a Madison native, shot a beautiful film with cinematography showing lush farms, lots (and lots) of foliage and grass lined rural roads. Rather than poke fun at small town America, she celebrates it with feisty, hard working salt of the earth characters. As if to showcase the goodness of her characters more, the obvious "out of towners" who pass through the town to stop and get gas at the store Jane works at are all horrible - morons, abusers or just plain mean, and not given the chance for redemption that she affords her Baraboo residents.

I didn't dislike Baraboo, but I wasn't really drawn into it either. While Sweeney makes the town a character on its own through her myriad scenery shots, and even for a slice-of-life film, I needed a little more story and character development to really enjoy the film. Baraboo can be appreciated for its heart and its beauty, but its lack of substance is its ultimate detriment.