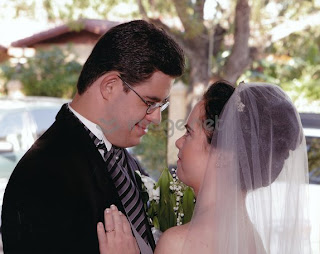 Side note - if anyone is interested in seeing this film, it will be aired on HBO on October 14, 2010

Monica & David is a documentary about a great love story. What makes it different is that Monica and David both have Down syndrome and while they are unable to live on their own as a couple, decide to marry. An examination of the lives of two very special people who are very much in love, Monica & David is a film that shows love can transcend most barriers.

Director Alexandra Codina, Monica's first cousin, noted in a talk back following the screening I attended that she made the film to show those who are against marriage among the intellectual disabled that these relationships, with the right support, can not only work, but flourish. The key factor, however, is support, and though there are many challenges, the environment that Monica and David live in is nearly ideal. Monica's mother, foreseeing the challenges her daughter would face, both emotionally and financially, created a solid and protective world for Monica that affords her comfort and security. She and David are able to live with Monica's parents, and even have their own wing at their apartment at the beach. The family does face challenges and concern while caring for Monica and David and I don't want to downplay the difficulties they face, but it's absolutely wonderful that the two are able to flourish in their world, but it appears to be more ideal than the norm.

Having said that, I really enjoyed Monica & David. The film also shines a light on the issue of dignity and the desire the disabled have to be productive members of society and the need for jobs for this demographic. Monica & David is a delightful film, and it's clear why it has been a festival circuit hit, including at its Tribeca premiere where it had 9 sold out screenings. Monica & David is sweet and charming, which are perfect adjectives to describe the film's couple. The love they have for another is very beautiful and I'm sure a lot of preconceptions about people with Down syndrome will be shattered once people see it.