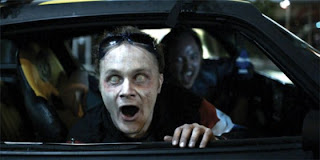 A revenant is a living dead creature, not quite a zombie, and not quite a vampire, but it needs blood to survive or its body will continue to rapidly decompose. Though the rules are not completely clear, the way to kill one is to drive a stake through its chest and cut off its head. In the film The Revenant, David Anders plays Bart, a soldier killed in Iraq who wakes up in a grave and has no idea what's happened to him. It's only after he visits his best friend Joey (Chris Wylde) that he realizes he's actually dead, despite the fact that he's walking around and interacting with people (though his smell isn't so great). After the initial shock over the situation, Bart and Joey figure out how to keep Bart going, which involves draining humans of their blood, so they set off on a killing spree, but kill two birds with one stone, killing druggies, thieves and murderers, attracting the attention of the police and media who dub them, "The Vigilante Gunslingers."

The Revenant is a buddy movie of a completely different order, and there are things to like about it and things that left me cold. (Pun intended) Director Kerry Prior, who also attended the screening I went to makes a decent directorial debut. The film's attributes are not its superior acting, (though the acting was decent) but its premise of zombie/vampire guy as rogue superhero. I think that is a fun premise and it made for a lot of entertaining and funny scenes, but the most honest word I can think of to describe most of the film is "juvenile", which isn't always a bad thing but can get tiresome after a while.

The Revenant is certainly a genre film, and will be enjoyed by lovers of horror-comedy fare. While not as clever as another horror-comedy film, Shaun of the Dead, The Revenant is a solid contribution. There are major gross-out moments and it's certainly not for the squeamish, particularly those who have disgusting bodily fluid or dismemberment issues.

I love great monster movies, particularly zombie films, but I wouldn't call myself a big fan of the horror genre as a whole. I think The Revenant lacks enough general appeal for a mainstream audience, but that it will be wildly successful with horror-comedy fans and may even become a cult classic.