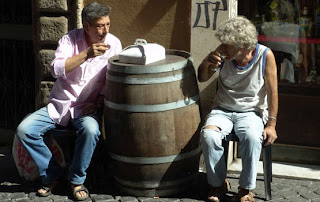 It is the holiday of Ferragosto (mid-August) in Rome, a time when everyone gets out of town to have fun, but Gianni, a middle-aged man who lives with his demanding, but loving mother finds himself in a "situation." It starts off as a financial situation, with his condominium association threatening to kick them out for non-payment of utilities and maintenance. Then a representative from the condo board comes up with a proposal: take care of my mother for an evening and I will pay your past due debts. What Gianni doesn't realize is that the man's elderly aunt will also join them, and later, he would be asked by his physician for the same favor of his mother. Gianni suddenly has a full house of elderly women to care for, and while Gianni's mother starts out gracious but distant, the four soon become the best of friends, all in the course of one hot day in mid-August, with Gianni running himself ragged to cater to them all.

Mid-August Lunch is absolutely charming, with wonderful performances by everyone, especially the ladies. The intimate feeling of the film makes it seem like Director-Writer-Star di Gregorio (who looks and carries himself like Jerry Orbach) just put a camera somewhere and let people do their thing. The story is simple and unfolds beautifully and organically, with character shifts performed in a brilliantly subtle way. All of the women begin their stay appearing meek and complacent, but after being drawn out a little and allowed to be themselves without their overprotective sons watching their every move, show that they are strong Italian women, full of zest and personality. This is a lesson Gianni seems to take to heart with his own mother, who he sees come out of her shell in the presence of the group.

Set in Rome, Mid-August Lunch is mostly set in the small apartment and surrounding neighborhood, but a short scene when Gianni and his friend "The Viking" ride a motorcycle through the deserted streets of Rome was literally breathtaking. Even the neighborhood scenes were gorgeous; the old architecture, narrow streets and the kind of local commerce where one can walk into a small wine shop and buy a couple bottles of wine and have the guy behind the counter pour you a glass to enjoy outside for a minute.

The best word to describe Mid-August Lunch is "pleasant." I'm pretty sure there was a smile on my face during most of the film because the general camaraderie among everyone - the women, the locals and local merchants, even strangers was infectious. Where else but in Italy does it seem appropriate to go to the sea to get some fish and end up cracking open a bottle of wine with the fisherman and sharing a glass or two? The film is simple to the point of refreshing, yet quite beautiful and entertaining.
MFF Ballot Vote: 4
My Scale: 4
Posted by The Cinemaphile at 9:31 AM