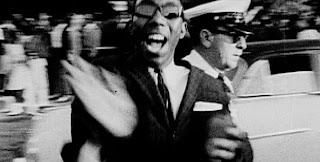 SOUNDTRACK FOR A REVOLUTION
2009

Soundtrack for a Revolution examines the impact of protest music on the Civil Rights Movement. Interviews with student movement leaders and activists including Julian Bond and Coretta Scott King provide personal accounts of the non-violent protests and the evolution of the rise of Martin Luther King as the leader of the movement. News stories, photographs and archival footage show evidence of the stories being told. Also featured are current artists, including Joss Stone, John Legend and The Roots, who perform some of the songs sung by the hundreds of protesters more than forty years ago.

Like another film I recently screened at the Milwaukee Film Festival, Freedom Riders, Soundtrack for a Revolution is a powerful documentary about a turbulent and important piece of 20th century history; in fact, the broad series of events covered include the subject of the freedom rides. If anything, the photographs documenting those events were more effective than some of those used in the former film, which is an impressive achievement.

The modern-day performances were handled well; they could have brought the documentary to a screaming halt each time. Rather, it was a nice marriage of contemporary soulful singers and the past, with very little time spent showing the singer(s), instead just listening to the song with accompanying historical footage.

One of the things that hit me hardest about Soundtrack for a Revolution is that it both educates and shows the struggle people made to make the United States a better place. However, it also is self-aware enough to show that some of the principle figures learned that through music, their forefathers could provide tools for them to survive. One of the interviewees pointed out that the majority of the protest songs were derived from old negro slave spirituals and his generation had completely discounted them until they were embroiled in the Civil Rights Movement. It was only then that they truly grasped the strength the words and music provided. I love that the film, as a documentary, strives to serve as a historical educational tool, yet also shows that its subjects turned to history as well.