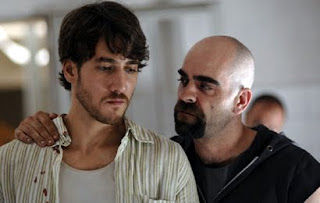 Juan Oliver is about to start his first day as a guard at a prison, and decides, against his pregnant wife's wishes, to go in a day early to meet the staff, get the lay of the land and more importantly, make a good impression. When he suffers a slight injury that precedes a planned prison riot, his fellow guards put him in a cell until they can investigate. Unfortunately, the prison goes into lock down and he wakes up to find himself in the middle of the general population, where he must pretend to be a new inmate in order to survive.

Cell 211 is exciting, dramatic and really dark. One thing that European cinema does not have a problem with is being darker than dark, unsettling and unpleasant, if the story needs it to be. (Unlike most American cinema, for the most part.) Cell 211 is suspenseful and gritty, with amazing performances by the two main actors Ammann and Tosar as (respectively) Oliver and Malamadre, the head leader of the prison population. Their combined intensity and natural performances are so good that it is really easy to forget that one is watching a work of fiction, since nothing screams "I'm acting!"

Cell 211 has a similar theme as Philippe de Broca's 1966 film King of Hearts, which examines whether those who are locked away in a mental institution are crazy, or are the crazy ones the people who diagnose them? Cell 211 presents the theory that the characteristics of humanity and loyalty are more prevalent on "the inside" than among those who make the laws and enforce them. Even the most feared and revered inmate holds his word against what his baser instincts dictate, whereas the guys calling the shots on the outside choose their positions based on politics and are not concerned with ramifications that extend beyond the well-being of most everyone beside themselves. Whichever side you feel is "right", Cell 211 is surprisingly deep and thought-provoking.