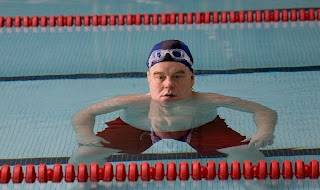 The directorial debut of Philip Seymour Hoffman, Jack Goes Boating stars Hoffman as Jack, a socially awkward and simple man whose small world expands a little when his best friends Clyde (John Ortiz) and Lucy (Daphne Rubin-Vega) set him up on a blind date with Lucy's co-worker Connie (Amy Ryan). Connie has her own issues: dealing with the loss of her parents, foundering at her job as a salesperson for grief seminars and struggling with near-crippling insecurity issues. The two timidly begin a life together, but as they get closer, cracks appear between Clyde and Lucy's own relationship, causing Jack to both question what he has always thought about them, and reaffirm what he wants in his own life.

It's worrisome to me when I'm watching a film and questioning if I didn't particularly care for a movie due to heightened expectations, or because it really wasn't that good. Unfortunately with the volume of films I try to ingest, this happens more often than I like, and it happened with Jack Goes Boating. It is exactly the kind of film I expect Hoffman to direct, because he is the guy for getting a great performance out of small story and character-driven independent films. And indeed, he portrayed Jack not unlike other awkward past roles like Scotty in Boogie Nights or Allen in Happiness. (Probably one of the most awkward characters in recent movie history.) But while watching him grimace, mumble his lines and take too long to answer questions, I couldn't help but realize I've seen this before - a lot - and early on, the awful feeling that the entire film was going to be this way was a little unsettling. There is nothing inherently wrong with any of the performances in the film; in fact, they were the best actors to bring these roles to the screen.

Jack Goes Boating poses the question of whether it's better to lay it all out there, be who you are, warts and all, and revel in the stability of simplicity or to be more concerned about appearances and "keeping sparks flying" when the relationship may not be as solid as it seems. One can apply this idea to the film in general as well and weigh simplicity versus complexity, but I think the word that comes to mind for Jack Goes Boating is "derivative." Jack Goes Boating isn't a terrible film, but it's also not very good either.